The Maskat Shrine Directors Unit’s history dates back to 1921. For many, the Directors Unit is the first unit that a new member is associated with. This is simply because the Directors Unit has the responsibility of “Welcoming” the new member. For many years, this “Welcome” was a members only initiation known as the “Hot Sands”. We were quite good at this as evidenced by the number of competition trophies that adorn the unit walls.

In the early 1990’s, the Imperial Divan, which is the governing body of all Shrine activities in North America voiced their discomfort and dislike of the “Hot Sands” and requested that all Shrine Centers look at other ways to “welcome” a new member. The Divan of Maskat immediately complied, stopping this type of initiation completely and, for several years, nothing was developed to replace it.

In 1995, the Maskat Shrine Directors Unit developed a totally new program for welcoming the new Shriner and called it the “Arch Program:. This program was centered around “Education”, rather than “Initiation” and included the new Noble’s Lady and Family. After several trial runs, this program, with the approval of “Imperial” was combined with the traditional First Section Ritualistic Program and the entire Ceremonial was opened to ladies, families, and friends.

This program has since been re-named “The Arch Ceremonial” and has enjoyed tremendous success, as variations of the program are being used by numerous Shrine Centers throughout North America. The Maskat Directors Unit is very proud of “our” program and the fact that one of the smallest Shrine Centers in North America has contributed such a successful program. There were suggestions early on that we copyright our program, but this idea was quickly discarded, as copyrighting the program would limit other Shrine Centers’ ability to make the program unique to their particular needs. Therefore, this is a program developed “By Shriners for Shriners”. 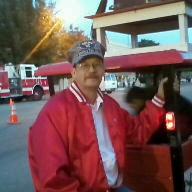 Maskat Shrine Directors train. This train, consisting of an engine and four cars, will accommodate sixteen(16) adult passengers or lots of youngsters. The train is loaded onto trailers and towed all over the North Texas area where we participate in parades, social, civic, and patriotic activities. Our members also participate in many activities of Maskat Shrine Center and are members of the Texas Shrine Directors Association (TSDA), meeting once per year during the month of March and again at the Texas Shrine Association’s annual June meeting.

Our unit meetings are held immediately following Maskat’s monthly stated meeting, which is the second Tuesday of each month with the exception of July and August. Also, we have a very enjoyable quarterly social function with our ladies and widows of members of the unit.