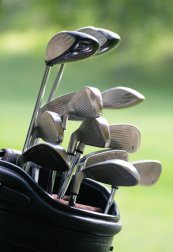 The Maskat Shrine  Golf Tournament is played annually, usually on the 3rd Friday in April each year.  Originally, it was a charity fundraiser for Shriners Hospitals for Children (SHC). The first tournament began in 2001 after Illustrious Past Potentate Don Wright suggested to then current Potentate Terry Huff that a golf tournament might be a good way for Maskat Shrine to have a fundraiser for SHC. Potentate Huff approved this and appointed Don Wright the Golf Chairman.

From the very beginning, we  aggressively solicited area businesses to support this tournament. During play Sausage Wraps were provided, and there was a meal for the players after the tournament. Falls Distributing donated very nice prizes. Area car dealers made sure that there were cars to be won by anyone fortunate enough to get a hole-in-one on selected holes. Every year more and more businesses purchased hole sponsor signs, and the list of our corporate sponsors grew.

Through the efforts of Maskat Shriners and their Ladies, the generosity of area businesses, and the support of the Wichita Falls golfing community that first tournament was a big success. Each year it  continued to grow and become even more successful. It became a very popular and fun tournament.  For 15 years this tournament was a Charitable Fundraiser and raised over $260,000 in support of Shriners Hospitals for Children.

Beginning in 2016, the economical climate required  more sources of income to support the local organization if we were to be able to continue with our mission.  Therefore, this event became a fraternal fundraiser and proceeds became a part of our operating budget.