It started as a simple summertime West Texas vs. East Texas high school all-star football game back in 1938. Today, the Oil Bowl is one of the most prestigious postseason all-star games in the United States.

From 1945 until 2012 (except for one year) the format was Texas vs. Oklahoma. It didn’t get much better than that. The top high school players from the two states went head-to-head every summer for football bragging rights.  The 2013 Oil Bowl was an East vs. West Texas Game.  Beginning with the 2014 game, players will be coming from Texas and surrounding states.

Many Oil Bowlers have gone on to be stars in college and professional football. Steve Owens went from here to win the Heisman Trophy. Others — like Jack Mildren, J.C. Watts and Steve Largent — have not only made names for themselves in football, but also politics.

The primary purpose of the game is to raise money to help children with orthopedic and burn injuries. “Strong legs run, so weak legs may walk” has been the motto of the Oil Bowl ever since the Maskat Shrine Center of Wichita Falls, Texas, came up with the idea to stage this game every summer.

Thousands of dollars have been raised to benefit the less fortunate. For the first seventy-four years of the game (1938-2011), the proceeds from each game were divided  between the two states–Texas’ share going to help the North Texas Rehabilitation Center in Wichita Falls and Oklahoma’s share going to the Oklahoma Coaches Association charities.  Beginning with the Seventy-Fifth game in 2012, net proceeds  go to Shriners Hospitals for Children.  Please visit their WEBSITE for more information about the great work Shriners Hospitals do to “help the Children.”

2003 Potentates pictured in this historic meeting are, (left to right); 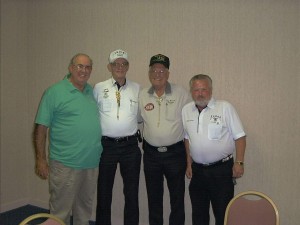