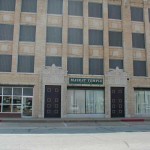 Maskat Shrine Center took its name from a seaport on the Gulf of Oman.  It was granted dispensation to organize on June 22, 1920. Our charter was granted on June 16, 1921.  Walter Cline served as Potentate both years. Not only was he our first Potentate, he was also the only one to ever serve two terms. Illustrious Sir Cline would later serve as our only Imperial Officer, rising to Imperial Potentate in 1939-40.

The creation of Maskat Shrine is remembered as a wonderful event for our city. In August 1920, the first Ceremonial for new Shriners was held, and every business in town displayed some type of Shrine emblem. Imperial Potentate Ellis Garretson from Affifi Shrine in Tacoma, Washington, was present, as well as Governor Will Hobby of Ben Hur Temple in Austin. Many Shriners from Dallas (Hella), Fort Worth (Moslah), and Austin (Ben Hur) attended.

Since its creation, Maskat Shrine has contributed to our fraternity, to philanthropy, and to our city. With a membership of approximately 550 as of October 2009, Maskat is considered small when compared to the other 12 Texas Shrine Centers.  However, its hard-working membership has earned the respect of the larger organizations. Our Shrine brethren across the state know that when Maskat is involved, the work gets done.

The City of Wichita Falls and surrounding communities have benefited from our membership. Shriners have served as mayor, city council members, Rotary and other service organization officers,  and school administrators. Others have served on hospital boards and even in the United States Senate.  Teachers, judges, attorneys, medical doctors, etc., are also included in Maskat’s membership.  Maskat Shriners have assumed leadership positions on numerous occasions, and more importantly, have helped other leaders carry out functions and reach goals from “behind the scenes.”

The Oil Bowl Football Classic was started by Shriners in 1938.  It has continued to be one of the highlights of Maskat. The money raised in this benefit football game was divided with the Oklahoma Coaches Association for their charities through the 2011 game with our portion going to local charities to be used for children with special needs.  Beginning with the 2012 game, Shriners Hospitals for Children became the official charity for the Oil Bowl until 2020. With the 2013 game, the format changed to East-Texas vs West-Texas All-Stars. Because of the COVID-19 Pandemic the game was not played in 2020. Beginning in 2021, it became a fraternal fundraiser for the benefit of Maskat Shriners.

Maskat Shrine sends patients from the eighteen-county area in North Texas to the Shriners Hospitals Children and helps pay for their transportation (gasoline or airfare), meals, and lodging for their hospital visit. The hospital visit (surgery, therapy, etc.) is free to the families and patients.

Our deceased leaders and members plotted an ambitious course for those of us who follow. Over the years,  this has been an inspiring, challenging and rewarding experience for Maskat Shriners. The Oil Bowl, our beloved hospitals, and the high standing in the community we have inherited from them, must be passed on. May the memories of their accomplishments help us remember them and may the positive and enriching experiences we have enjoyed continue for future generations.