Several years ago, Masket Temple began taking in some new members in their twenties and thirties who wanted to help all the Units and to do some new and innotative things. They asked to form a new, noncompetitive unit that could help promote the success of all our members. Many were already members of one competing unit or another and intended to stay in their units. They just wanted an opportunity to help Maskat Shrine in any and every way possible; they wanted to do more for Maskat; therefore, they asked the current Potentate for permission to form a totally new and different unit designed to help in all unit activities and concentrate on raising money for Maskat Shrine. He gave his approval, and the Wild Fez Unit was formed. 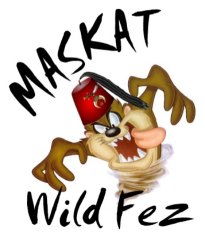 It took these young men a few years to “come into their own” so to speak, but they had plenty of support. Nearly all were members of other units; and, as word got around, they began to grow in membership. Now they have many older members who want to help in their endeavors and the wholehearted support of every active member of Maskat Temple.

Sometime in 2005, they decided that they wanted to spearhead a fund-raising project for Maskat. They put their heads together and, with the help of 2005 High Priest and Prophet Mark Terry, started making plans for an open air concert to take place on Maskat Temple’s land on Hatton Road. It took a year of planning, extensive work on the land, and a lot of work by a bunch of people. In 2006, we had our first concert. I would like to say it was a complete success, but we had weather problems [some rain and winds that kept the crowds at home] and did not cover expenses. But it was considered a work in progress with unlimited potential. We tried it again! 2007 was much better and had a great turnout. The Wild Fez Unit covered expenses for both years and made some money for Maskat temple!!

Shrinefest 2008 and 2009 also made money. Needless to say, a project of this magnitude requires all Nobles and Ladies to work together. Appropriately named “ShrineFest,” it has been a Temple Project from the beginning and a unifying force for us. Without the Wild Fezzes, Shrinefest would never have become a reality.

The Wild Fez Unit has been awonderful addition to Maskat Shrine. These men are knowledgeable, youthful, and energetic. They inject their energy and enthusiasm into this and every Temple project.